How to travel by train from Bucharest 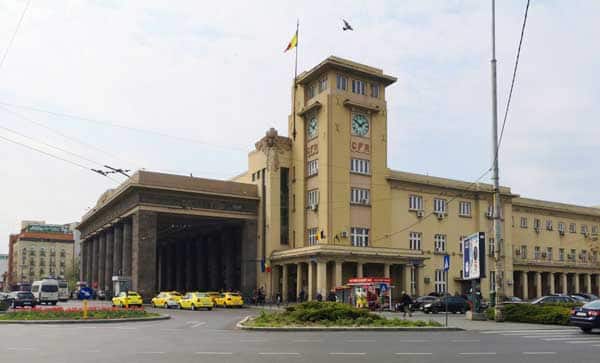 Located near the center of Bucharest, Gara de Nord is the city’s largest train station as well as the most important one in all of Romania.
The name also sounds the same as the more famous Gare du Nord in Paris, another reminder of why Bucharest was considered the ‘Paris of the East’.
Due to its significance, Gara de Nord in Bucharest is connected to all cities and areas in Romania.
Whether you want to visit Transylvania, Bucovina, the seaside or go across the border, this is where you can find a train to take you directly there.
It is very easy to reach Gara de Nord from all corners of Bucharest.
You can either take the Metro and get off at the station with the same name. If you have a lot of luggage, you can opt for a taxi or Uber.
This should not cost more than 20 RON if you are already in Bucharest.
There are also buses stopping at the train station, but their schedule is not fixed and they tend to be slow, especially during rush hours. 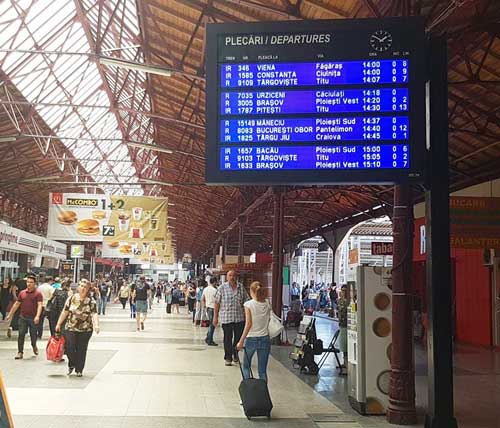 IR (InterRegio trains) – good for long distances, usually these kinds of trains are connecting the country from one border to the other

IRN (InterRegio Night trains) same as IR trains but traveling by night and equipped with beds.
There are different options depending on the budget, from 6 bed compartment wagons to individual rooms

R (Regio trains) – regional trains covering long distances, are often slower as they stop in almost every station on the route 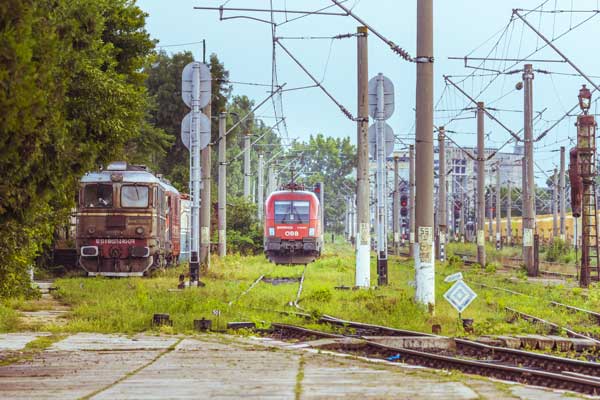 Types of comfort in train

Class I (available both for IR and R trains) represents the higher comfort class, with customizable chairs, tables and electrical sockets. This is much more expensive than the standard option.

Class II (available for all types of trains) is available on the standard comunal wagons. Often without electrical sockets or tables, just front to front seats, this option is the cheapest available.

Very important is to make sure that your ticket includes a seat.
On overcrowded trains (seasonal ones) there are times when the CFR sells standing tickets.
Also, there are a few terms that you need to be accustomed to in order to have a smooth ride:
Departure = Plecare / Arrival = Sosire / Platform Number = Linia

Bucharest – Brasov (price 50 RON = 11 EUR) – taking almost 3 hours, this route is the most traveled by foreing tourists. Here you can find several of the most important tourist attractions of Romania, like Sinaia with the amazing Peles Castle, or the city of Brasov.
From here you can take a bus and visit Bran Castle also known as Dracula’s Castle.

Bucharest – Constanta (60 RON = 13 EUR) – the fastest and most loved route by the Romanian youth.
This is also called the Sun Train as it takes you to the seaside.

Bucureşti Nord – Timişoara Nord (price 100 RON = 22 EUR) – is connecting the most western city of Romania on the border with Hungary with the capital Bucharest.
This is the longest route taking up to 10 hours

Bucharest – Vatra Dornei (price 100 RON = 22 EUR) – another very long route, almost 9 hours, this line will take you to the northest point of the country in the amazing land of painted monasteries, known as Bucovina.

Where to buy tickets

If you travel on the same day, you can buy tickets from the vending machines or directly from the offices located in the train stations and operating 24/7.

Tickets for CFR trains can be bought online on their website https://bilete.cfrcalatori.ro/en-GB/Itineraries. However, you need to make sure you purchase one day before the departure.

Besides CFR which runs the majority of trains in Romania, there are also several private train operators.
Sometimes you can find better and more comfortable trains if you choose a private company.
But you have to know that they cover only a few routes and sometimes cancel the trip.

Softrans – www.softrans.ro – doesn’t have english translation on the website but is usually cheaper than any other options.

Astra Trans Carpatic –  www.astratranscarpatic.ro – is operating only four routes, but it has a english version of the website.

In conclusion, the trains are a perfect and cheap choice for backpackers or tourists on long vacations and a good way to enjoy the landscape, admire the Romanian countryside, or the mountains and green hills.

How to get to THERME

Top places to see in Bucharest

How to travel by train from Bucharest

Proud to have guided

With a total of